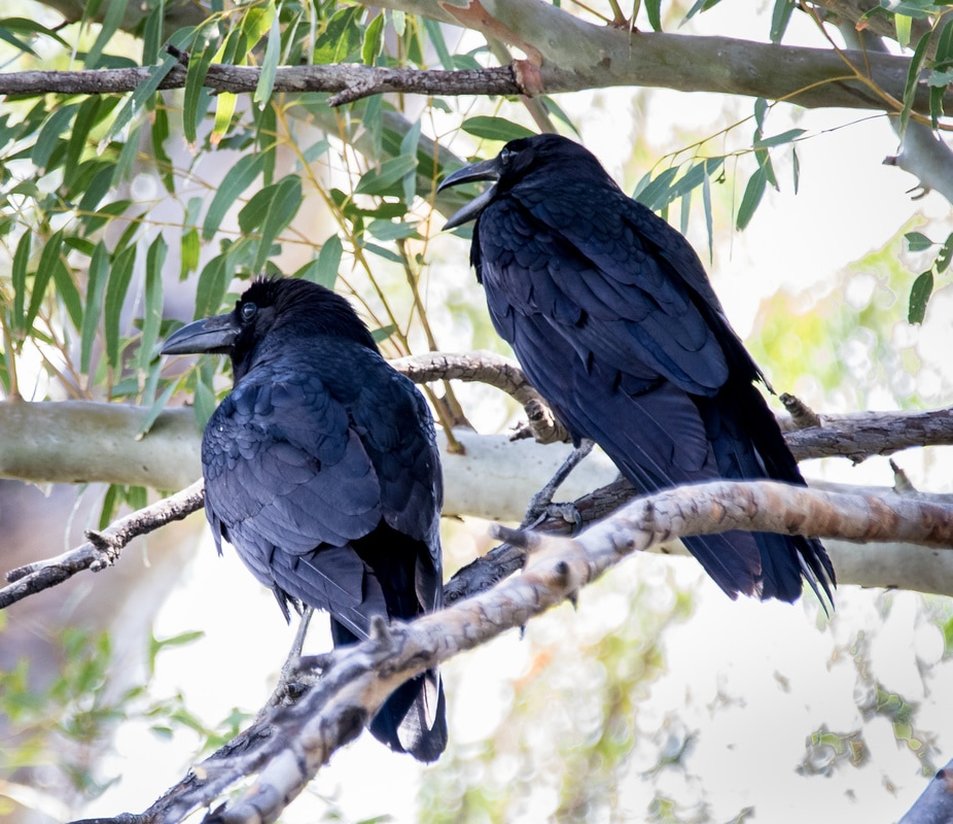 The Common Raven is in the order Passeriformes (songbirds), Family Corvidae, also known as Corvids. This family includes crows, ravens, rooks, jackdaws, jays, magpies, treepies, choughs and nutcrackers.  Within this family, a third are in the genus Corvus which includes  jackdaws, crows, rooks and ravens. [See Wikipedia, Corvidae].

In SE Arizona there are no crows, only ravens, with the Common Raven being the most common.  The other raven in the southwest is the Chihuahuan Raven, smaller than the Common Raven, and more common in lower elevations.

The images above and below were captured at Agua Caliente in the spring of 2017, where a pair of Common Ravens  nested high in a tree.  They were tough to spot, keeping themselves hidden behind leaves and branches. They are also tough to photograph since the whole bird is black, and they usually sit in the shadows. However, with a bit of luck and the help of more than one slider in Adobe Photoshop Lightroom, I was able to create these images. 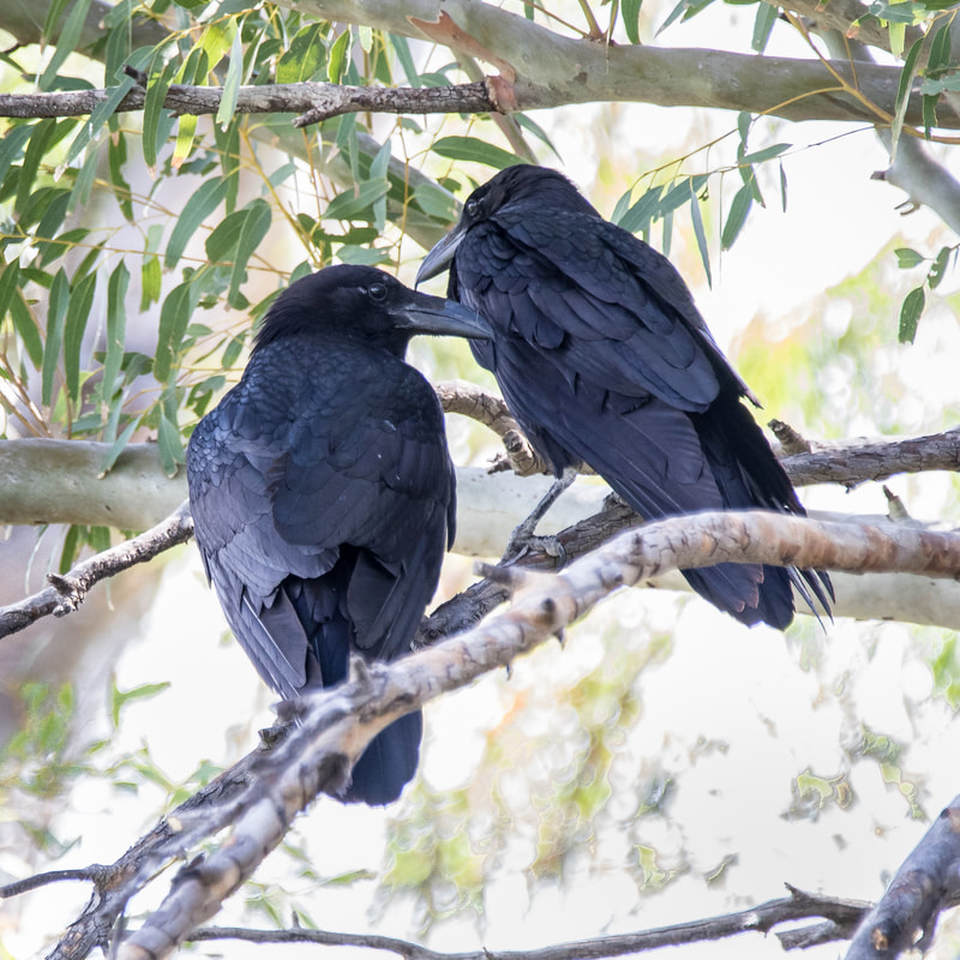 The Common Raven has a thick neck, large head, and a lethal looking beak.  They are omnivores, eating almost anything dead or alive, and have a reputation for outsized intelligence, especially known for complex problem solving. For more on corvid intellect, see Jennifer Ackerman's book The Genius of Birds, Penguin 2016.

​Common Ravens will cruise and soar with raptors: the image below was captured during the annual hawkwatch in Tubac, AZ, March 2017. 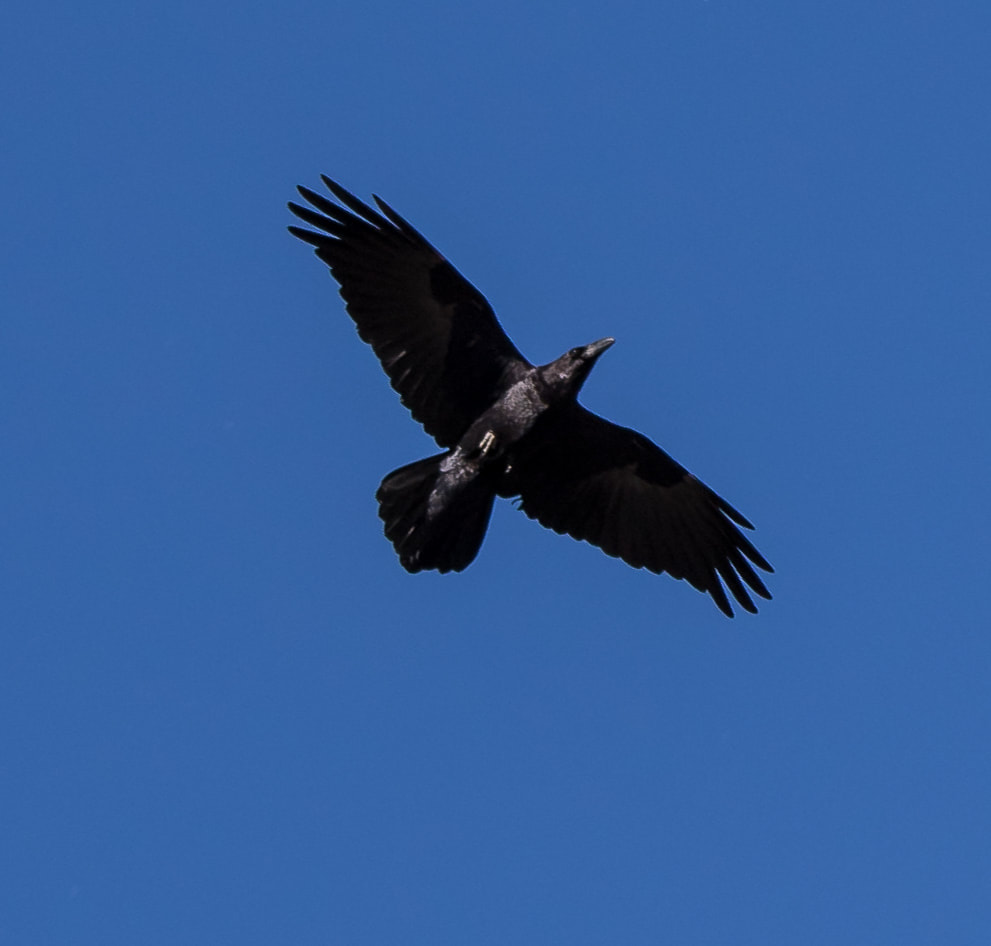 Common Ravens are known for aerobatics and aggressive protection of their territory. Below are 4 images captured at Agua Caliente in May of 2017. A juvenile Red-tailed Hawk cruised into the park from the west, and was intercepted by not one, but two Common Ravens who took turns going after the hawk in flight. The hawk eventually was driven north and west away from the raven's nest. 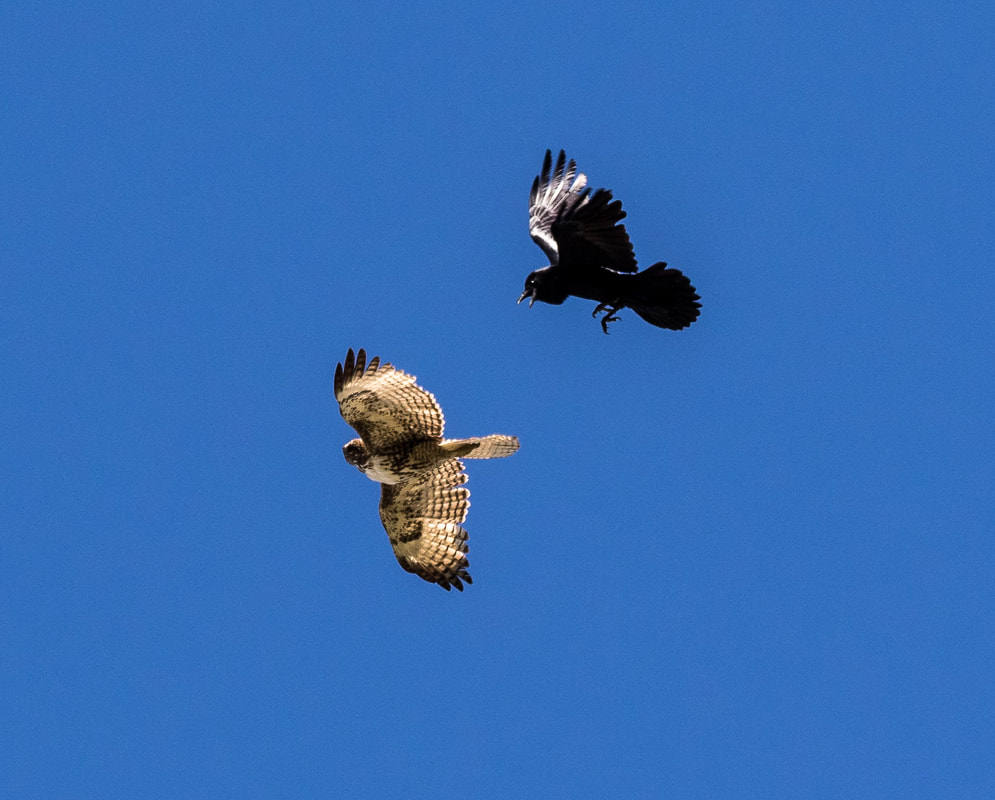 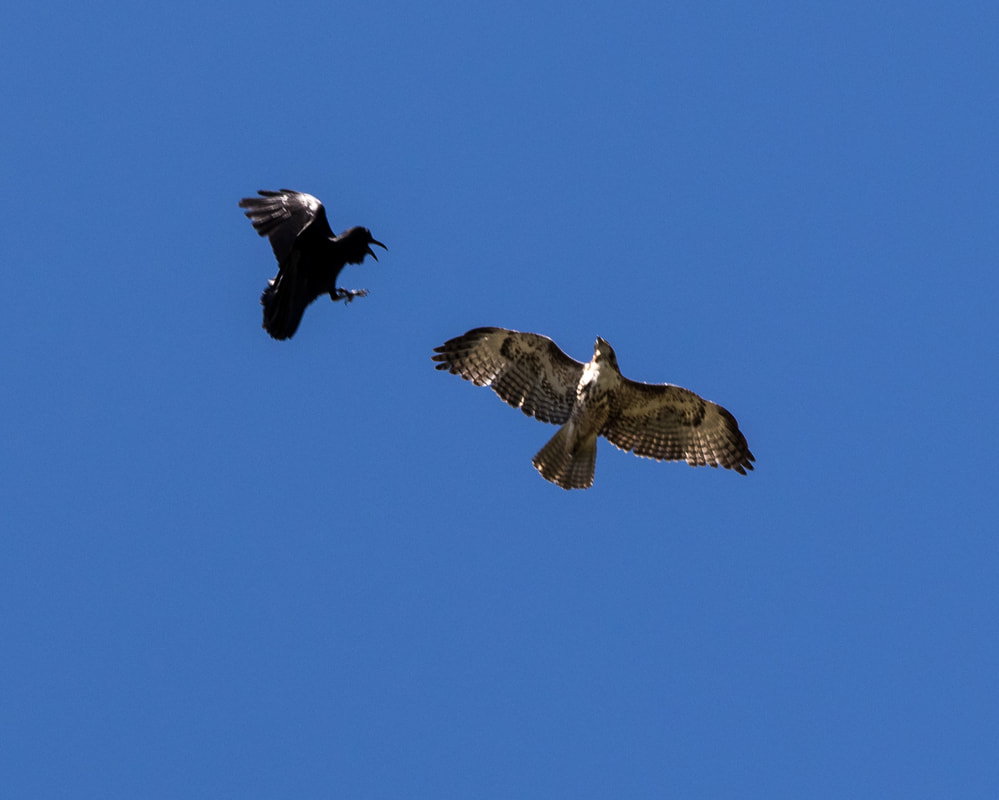 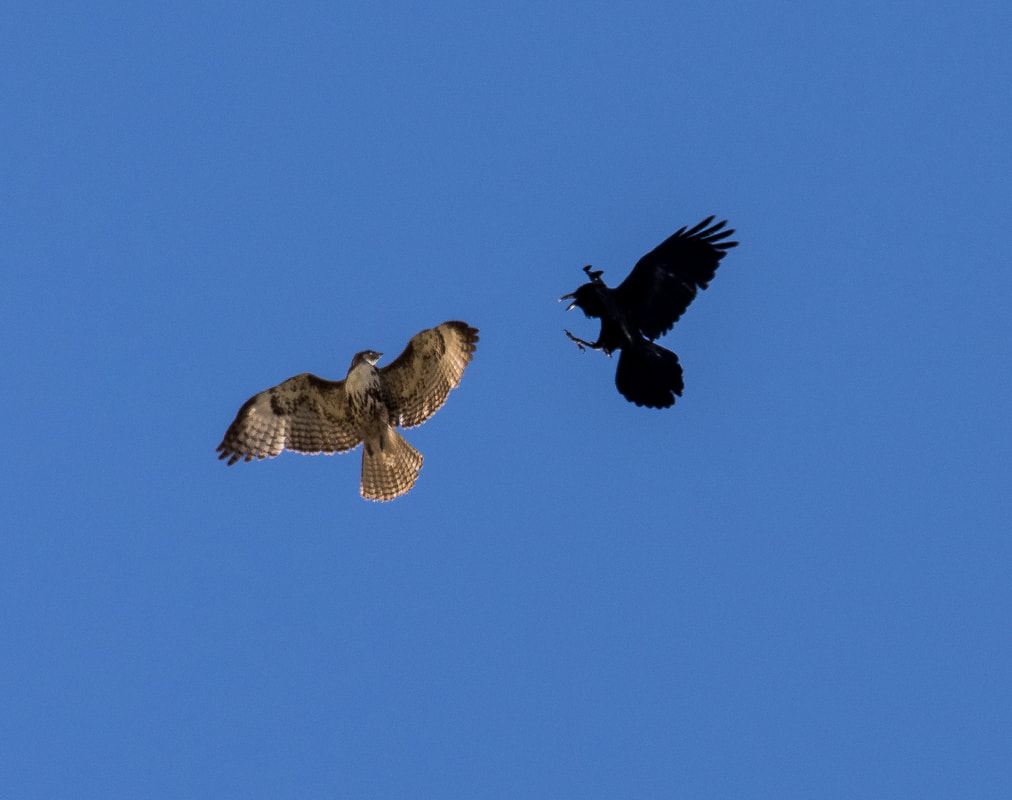 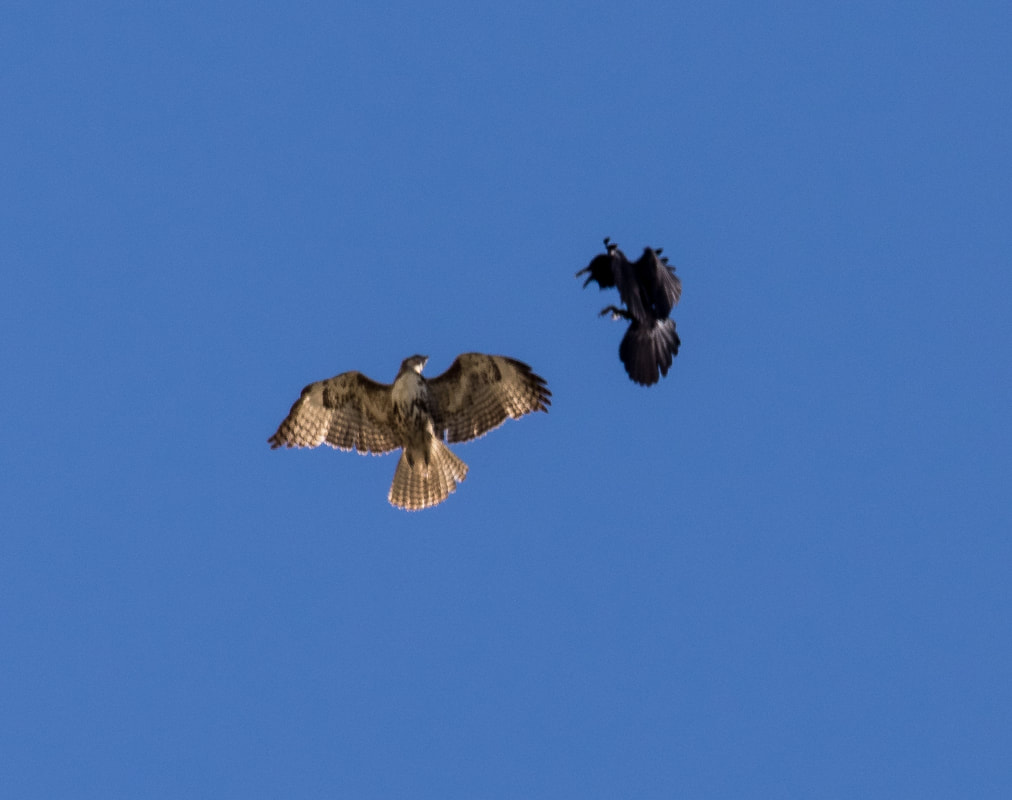 It is interesting that there was a Cooper's Hawk nest in the same park with three nestlings not more than 50 yards from the Raven's nest.  However, the two species seem to have established a truce that allowed both families to each raise their young without in turn eating their neighbors. ​